PHILADELPHIA, May 4, 2017 /PRNewswire/ -- Philly Shipyard, Inc. (PSI), the wholly-owned U.S. subsidiary of Philly Shipyard ASA (Oslo: PHLY), and Matson, Inc. (NYSE: MATX), a leading U.S. carrier in the Pacific, today marked an important milestone in the construction of the first of two new "Aloha Class" containerships to be delivered to Matson in the third quarter of 2018 and first quarter of 2019, respectively.  Designed specifically for Hawaii service, they will be the largest containerships ever built in the U.S. 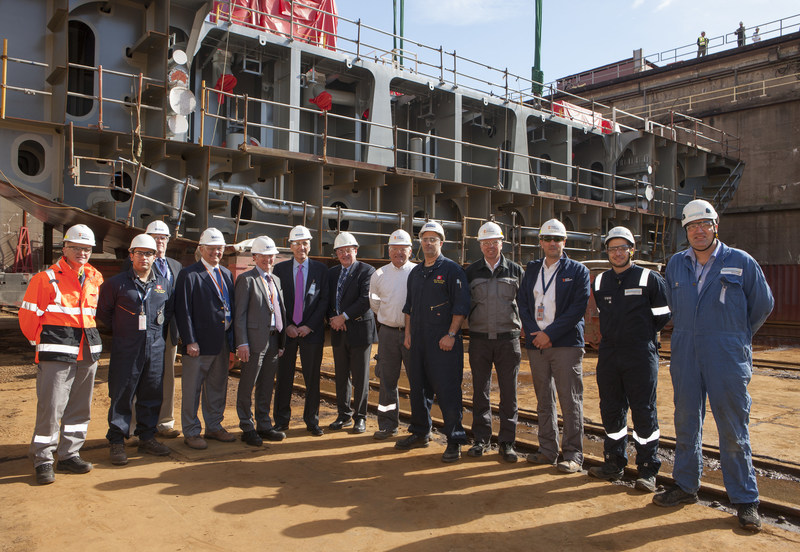 Matson and Philly Shipyard executives celebrate a milestone in construction of the biggest containership built in the U.S. at the shipyard this morning.

During today's ceremony in the dry dock where the first engine room section, weighing 420 metric tons, was lowered into place, senior executives of Philly Shipyard and Matson placed coins under the section as part of a long-held shipbuilding tradition to bring good fortune and safe travels.

"This first Aloha Class ship, named in honor of Hawaii's former senior senator and longtime champion of the U.S. maritime industry Daniel K. Inouye, will be the biggest containership ever built in the U.S.  We are excited that this milestone in its construction means Matson will be able to put this new ship into service a little over a year from now," said Forest.

"It's an honor to return to our shipbuilding foundation and build two more containerships that will service the state of Hawaii and its citizens," remarked Nerbovik. In 2001 we stood in this very same location for the dock mounting of Matson's first vessel when we were a brand new shipyard. Sixteen years later, we are pouring the same pride into another quality build that will safely navigate the Hawaii-Pacific trade for decades to follow."

The 850-foot long, 3,600 TEU* Aloha Class vessels will be Matson's largest ships.  They will also be faster, designed to operate at speeds in excess of 23 knots, helping ensure timely delivery of goods in Hawaii.  Though bigger, the ships are also designed to accommodate future needs by being able to navigate safely into some of Hawaii's smaller ports.

The new vessels will incorporate a number of "green ship technology" features that will help protect the environment, including a more fuel efficient hull design, dual fuel engines that can be adapted to use liquefied natural gas (LNG), environmentally safe double hull fuel tanks and fresh water ballast systems.

About Matson
Founded in 1882, Matson is a leading U.S. carrier in the Pacific. Matson provides a vital lifeline to the economies of Hawaii, Alaska, Guam, Micronesia and select South Pacific islands, and operates a premium, expedited service from China to Southern California. The Company's fleet of 22 owned vessels includes containerships, combination container and roll-on/roll-off ships and custom-designed barges. Matson Logistics, established in 1987, extends the geographic reach of Matson's transportation network throughout the continental U.S. Its integrated, asset-light logistics services include rail intermodal, highway brokerage, warehousing, and less-than-container load freight consolidation and forwarding to Alaska. Additional information about Matson, Inc. is available at www.matson.com.

About Philly Shipyard
Philly Shipyard is a leading U.S. commercial shipyard constructing vessels for operation in the Jones Act market.  It possesses a state-of-the-art shipbuilding facility and has earned a reputation as the preferred provider of oceangoing merchant vessels with a track record of delivering quality ships. Philly Shipyard is listed on the Oslo Stock Exchange and is majority-owned by Aker Capital AS, which in turn is wholly-owned by Aker ASA. Aker is a Norwegian industrial investment company that creates value through active ownership. Aker's investment portfolio is concentrated on key Norwegian industries that are international in scope: oil and gas, fisheries and biotechnology, and marine assets. Aker's industrial holdings comprise ownership interests in Aker Solutions, Kvaerner, Aker BP, Aker BioMarine, Ocean Yield and Akastor.  For more information on Philly Shipyard, visit www.phillyshipyard.com.