, /PRNewswire/ -- (NYSE: MATX), a leading U.S. carrier in the Pacific, and General Dynamics NASSCO shipyard, christened the second of two Kanaloa Class vessels, the largest combination container / roll-on, roll-off ("con-ro") ships ever built in , in a ceremony at the shipyard in on . 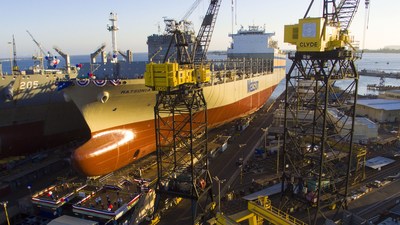 The new vessel was christened 'Matsonia,' an iconic name in Matson's long history, dating to the construction of Matson's first ship of that name in 1912. Three more ships were given the name in subsequent years; this vessel will be the fifth.

The new Matsonia is the second of two new ships being built for -based Matson by at a total cost of approximately for the pair, and the fourth of four new vessels that Matson will put into service during 2018, 2019 and 2020.  Named in honor of the ocean deity revered in the native Hawaiian culture, Matson's two "Kanaloa Class" vessels constructed at the shipyard are built on a 3,500 TEU* vessel platform.

At 870 feet long, 114 feet wide (beam), with a deep draft of 38 feet and weighing in at over 50,000 metric tons, Matsonia will join Lurline as Matson's largest ships and the largest con-ro vessels ever constructed in the U.S. They are also among Matson's fastest vessels, with a top speed of 23 knots, helping ensure on-time deliveries in from Matson's three terminals in , and Long Beach.

Under the latest (IMO) requirements for engine manufacturers, Tier 3 engines reduce the levels of particulate emissions by 40 percent and nitrogen oxide emissions by 20 percent, as compared to Tier 2 standards. Matson's deployment of Tier 3 engines in both Kanaloa Class vessels is supported by California Climate Investments, a statewide initiative that puts billions of Cap-and-Trade dollars to work reducing greenhouse gas emissions, strengthening the economy and improving public health and the environment — particularly in disadvantaged communities.

"Matson is already benefitting from the speed, capacity and improved environmental profile of the three new ships we've put into service since 2018," said , Matson's chairman and chief executive officer, after the shipyard ceremony. "Matsonia will be our fourth new ship, completing a three-year fleet renewal program that positions us well to serve the needs of our communities in for many years to come."

"As a proud company and Jones Act carrier, our investment in this new ship is about much more than maintaining a high level of service to Hawaii. It also helps drive substantial economic benefits in and opportunities in communities around the Pacific, where this vessel will operate," Cox said.

"The construction of Matsonia represents over a year's work for about 2,000 professionals here at NASSCO…engineers, tradesmen and lots of support people and countless others who produced the materials used to build this ship that are sourced here in the Over its expected lifespan, this ship will generate approximately 4.5 million man-hours of work opportunity for the mariners who will operate it and decades of steady work for all of the dockworkers and terminal personnel that move the cargo on and off our ships.

"These are all living wage jobs, supporting the families of these American workers and the taxes they pay," Cox said, adding, "Multiply that by all the ships and other shipyards are building, and you get a sense of the value of the maritime industry to our country and its economy. In alone, there are more than 51,000 jobs tied to the American maritime industry, providing over in labor income with a total economic impact in the state of more than ."

, President of General Dynamics NASSCO, said, "The Matsonia is a reflection of the highest standards of shipbuilding and we are proud to celebrate her launching. This extraordinary vessel is a testament to the hard work, unity and strength of our thousands of dedicated shipbuilders who made this possible."

Matson invited , wife of Matson's , to officially christen the vessel by breaking a ceremonial bottle of champagne against the ship's hull. Immediately after the bottle was broken, the vessel was released from its build ways and slid backward into . Matsonia was then docked at nearby testing and trials berth, where the final stages of construction will be completed.

Matson is expected to take delivery of the vessel in the fourth quarter of 2020.

More information on Matsonia and Matson's fleet modernization program is available at: https://www.matson.com/kanaloa-class.html

Founded in 1882, (NYSE: MATX) is a leading provider of ocean transportation and logistics services.  Matson provides a vital lifeline to the domestic non-contiguous economies of Hawaii, Alaska, and Guam, and to other island economies in Micronesia.  Matson also operates a premium, expedited service from China to Southern California and provides services to Okinawa, Japan and various islands in the South Pacific.  The Company's fleet of owned and chartered vessels includes containerships, combination container and roll-on/roll-off ships and custom-designed barges.  , established in 1987, extends the geographic reach of Matson's transportation network throughout the continental U.S.  Its integrated, asset-light logistics services include rail intermodal, highway brokerage, warehousing, freight consolidation, Asia supply chain services, and forwarding to Alaska.  Additional information about the Company is available at www.matson.com

General Dynamics NASSCO has been designing, building, and repairing ships since 1960. Today, the company conducts work in four ports in and around the world. is the largest shipyard on the of conducting design, new construction and repair of ships. In the past decade, delivered more than 30 ocean-going ships to government and commercial customers—including the world's first LNG-powered containerships and several other lead ships.

More information about can be found at www.nassco.com.

More information about General Dynamics can be found at www.generaldynamics.com.