, /PRNewswire/ --  (NYSE: MATX), a leading U.S. carrier in the Pacific, and (PSI), the wholly-owned U.S. subsidiary of (Oslo: PHLY) christened the largest containership ever built in in a ceremony at the on Saturday, June 30. 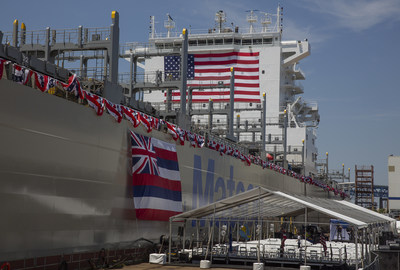 The new vessel is named '' in honor of late senior U.S. Senator, who was a longstanding supporter of the U.S. maritime industry and its important role in supporting economy. It is the first of two new ships being built for -based by at a total cost of approximately for the pair, and the first of four new vessels that will put into its service during the next two years.

"This is a proud day for all of us at ," said , chairman and chief executive officer, at the shipyard ceremony. "Over our first 136 years, fleet has evolved from sailing ships to larger steamers to diesel power, consistent with changes in technology and always evolving in step with the needs of a growing economy.

"This new vessel, designed specifically to serve and built with LNG-compatible engines, is the next generation of vessel and sets a new standard for cargo transportation in Hawaii.  It also symbolizes continuing commitment to serving our Island home in the most efficient, effective and environmentally sound way into the future," Cox said.

Steinar Nerbovik, President and CEO, said, "It is with tremendous gratitude and pride that we celebrate the christening of ',' alongside , a returning customer. When this ship is delivered, no matter where it travels, it will represent the finest craftsmanship of shipbuilders, and fulfill our promise to provide American built and owned ships that will safely and securely service our nation."

invited , Sen. Inouye's wife, to officially christen the vessel by breaking a ceremonial bottle of champagne against the ship's hull.

The ceremony included a gathering of approximately 350 attendees including and PSI executives, shipyard workers and union leaders.  Speakers included Dr. , Assistant to the President of , Director of Trade and Industrial Policy and the Director of the ; Rear Admiral , Administrator of the ; General , commander of the U.S. Transportation Command (USTRANSCOM); and former governor .

Weighing in at over 51,400 metric tons, the 850-foot long and 3,600 TEU* capacity is largest ship and the largest containership ever constructed in the U.S.  It is also fastest vessel, with a top speed of nearly 24 knots, helping ensure on-time deliveries in from three terminals in , and Long Beach.

More information on and fleet modernization program is available at www.Matson.com .

Founded in 1882, (NYSE: MATX) is a leading provider of ocean transportation and logistics services.  Matson provides a vital lifeline to the domestic non-contiguous economies of , , and Guam, and to other island economies in Micronesia.  also operates a premium, expedited service from China to Southern California and provides services to Okinawa, Japan and various islands in the South Pacific.  The Company's fleet of owned and chartered vessels includes containerships, combination container and roll-on/roll-off ships and custom-designed barges.  Matson Logistics, established in 1987, extends the geographic reach of transportation network throughout the continental U.S.  Its integrated, asset-light logistics services include rail intermodal, highway brokerage, warehousing, freight consolidation, Asia supply chain services, and forwarding to Alaska.  Additional information about the Company is available at www.matson.com

is a leading U.S. commercial shipyard constructing vessels for operation in the Jones Act market. It possesses a state-of-the-art shipbuilding facility and has earned a reputation as the preferred provider of oceangoing merchant vessels with a track record of delivering quality ships. is listed on the and is majority-owned by Aker Capital AS, which in turn is wholly-owned by . Aker is a Norwegian industrial investment company that creates value through active ownership. Aker's investment portfolio is concentrated on key Norwegian industries that are international in scope: oil and gas, fisheries and biotechnology, and marine assets. Aker's industrial holdings comprise ownership interests in , , , Aker BioMarine, and Akastor. For more information on , visit www.phillyshipyard.com. 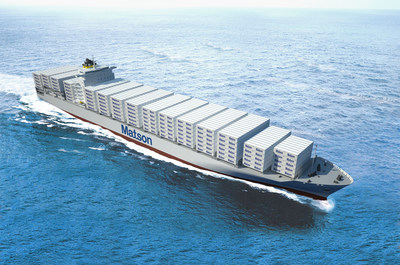